BDS Australia organises, supports and endorses initiatives aimed at  boycotts, divestment and sanctions (BDS) against corporations, organisations, institutions and governments that profit from the illegal occupation of Palestinian land and the continued oppression of the Palestinian people.

BDS involves BOYCOTTS of products and companies that profit from the oppression of the Palestinian people, financial DIVESTMENT from corporations and organisations whose investment portfolios include corporations profiting from the occupation, and calling for SANCTIONS against Israel as they continue to violate international law.

For more information about the BDS Movement visit their website here. Please also take the time to connect with our campaigns below and contact us if you have any feedback or questions.

HP and HP-branded corporations are directly implicated in and profit from Israel’s apartheid, colonization and illegal occupation against the Palestinian people.
HP or its subsidaries :
– provide services and technology to the Israeli army and police that maintain Israel’s illegal occupation of the West Bank and East Jerusalem since 1967 and the siege of Gaza
– maintain Israel’s central ID system and data base for the Israeli police, used to enforce a system of racial segregation and apartheid against Palestinian citizens of Israel.
– support Israel’s colonisation by maintaining information on Israeli citizens in illegal settlements in the occupied Palestinian West Bank.
– operate a research and development centre in the illegal Israeli settlement of Beitar Illit in the occupied West Bank.
TAKE ACTION and MORE INFORMATION

Global sportswear manufacturer Puma is involved in violations of international law and human rights. Puma is the main sponsor of the Israel Football Association (IFA), which includes teams in Israel’s illegal settlements on occupied Palestinian land.

Elbit produces numerous weapons, including drones, rocket launch and military aircraft systems and multiple surveillance systems, and is a key research and development partner to the Israeli Ministry of Defense.

Elbit surveillance technology and military equipment is used to maintain Israel’s illegal occupation of the West Bank and blockade of the Gaza Strip. Elbit markets its weapons systems, including its drones, as “battle-proven”. This means that they have been deployed against Palestinians living under Israel’s deadly military occupation.

The Victorian Government has entered into a partnership with Elbit Systems of Australia in the establishment of an AI Centre of Excellence in Melbourne, which will work with universities, and other bodies to produce applications that can be used across the defense, homeland security, and emergency services sectors 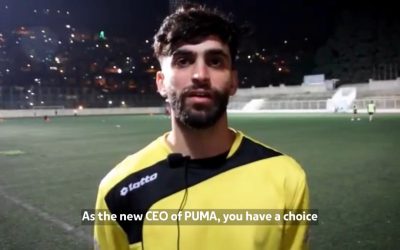 Published by on BDS movement website by Players of Balata Youth Club / January 20, 2023...

(This statement was co-ordinated by PACBI  - the Palestinian Campaign for the Academic and...

BDS Australia calls for review of Parliamentary Friends of IHRA

BDS Australia has called for a review of the newly established Parliamentary Friends of...

Letter to RMIT re their partnership with the Israeli arms manufacturer Elbit Systems.

Sept 1, 2022 Boycott of Israeli film fund by Israeli filmmakers In a significant development...

The University of Melbourne Student Union (UMSU) passed an historic motion on August 15, 2022 in...

Letter from the Palestinian Federation of Unions of University Professors and Employees (PFUUPE)...

Civil society organisations welcome the Future Fund’s exclusion of Elbit Systems, and call on the Federal and Victorian Governments to drop Elbit or risk complicity in serious violations of international law